END_OF_DOCUMENT_TOKEN_TO_BE_REPLACED

A group of Dakota elders will lead a conversation regarding the relocation of Inyan Sa, the sacred Red Rock. The conversation will take place Saturday, July 27, 10 a.m. to 3 p.m. at First Universalist Church, 3400 Dupont Ave. S., Minneapolis. A light lunch will be provided.

Here is the announcement:

You are cordially invited to a protocol-guided conversation about the future relocation and final placement of Inyan Sa, a granite boulder of immense significance to generations of Dakota people of the local area. Please join us as we collectively visualize a site commendation offered by a respected body of Dakota elders. Help us negotiate a non-adversarial, non political process to wisely arrive at a mediate consensus agreement regarding the permanent placement of Inyan Sa.

END_OF_DOCUMENT_TOKEN_TO_BE_REPLACED

The United Methodist Church (UMC) is moving forward with efforts to return the Dakota peoples’ sacred Red Rock, (in Dakota, In-Ya Sha or also spelled Eyah Shaw). It is one small step towards acknowledging the historical trauma and genocide inflicted on Native peoples by the U.S colonial enterprise, one in which the UMC participated.

Early Methodist ministers settled in the area along the Mississippi River near In-Ya Sha. When the Dakota people were exiled after the War of 1862, the Methodists continued preaching there. The rock evolved into a symbol for Methodist church camp. The Red Rock camp name persists today, but the rock itself sits in front of the Newport UMC.

Conversations have percolated for several years about returning In-Ya Sha. This March, Dakota elders made a formal request, asking the UMC to return it. In response, UMC Bishop Bruce Ough promised the church would do so.

But details needed to be worked out.

In the latest update,  Newport UMC congregational leaders voted in July to honor the Dakota elders’ request, according to a Star Tribune story.  The Dakota people “can and will determine the future location and care of the Red Rock,” the resolution said.

That was a big step, but not the last one. END_OF_DOCUMENT_TOKEN_TO_BE_REPLACED

On Saturday, May 13, Dakota traditional spiritual elders will gather to discuss the return of In-Yan Sha (the sacred Red Rock) to the Dakota people. The meeting will include a discussion of In-Yan Sha’s history and an announcement of the sacred site where the elders would like In-Yan Sha placed.

This meeting will be open to the public with limited seating. It will take place from 1:30 – 5:00 p.m. at All My Relations Gallery, 1414 East Franklin Ave., Minneapolis. Those are welcome who come with a good heart, and with respect for the elders, In-Yan Sha, and Dakota sacred sites.

In-Yan Sha is connected to the Dakota origin story. Methodist settlers took the rock in the 1800s; it became a symbol for the Methodist church camp. The seizure of the Red Rock is one symbol of how settler culture tried to assimilate and erase Dakota culture and religion. The rock has moved several times, and now resides in front of the Newport United Methodist Church (UMC). Bishop Bruce R. Ough of the UMC Minnesota Conference has expressed his interest in returning the rock; efforts have started to do this healing work in a good way.

END_OF_DOCUMENT_TOKEN_TO_BE_REPLACED

The Bishop of the United Methodist Church (UMC) in Minnesota, Bruce R. Ough, has committed to restoring Eyah Shaw — the sacred red rock — to the Dakota people. (In Dakota, Eyah means “rock” and Shaw means “red.”)

Before settlers arrived, Eyah Shaw was on the east bank of the Mississippi River several miles south of what is now St. Paul. Filmmaker and researcher Sheldon Wolfchild (Dakota) says Eyah Shaw is a sacred relative to Dakota people and deeply connected to their creation story. Dakota people traditionally would paint the boulder-sized rock with red stripes.

Early settlers saw the boulder as a significant landmark and began referring to the area simply as Red Rock. Red Rock’s early missionaries were Methodists. In the 1860s they purchased several acres of land to create a camp meeting; the religious gathering became synonymous with the Red Rock. While the camp — and the rock — have moved since that time, the name stuck. Red Rock Camp still exists today near Paynesville.

The rock itself now resides outside the Newport UMC, with local historic designation.

Wolfchild said the Dakota people had other sacred rocks in the area, but settlers destroyed them. He has thanked the UMC for protecting Eyah Shaw, but says it is now time for the rock to come home to its people. END_OF_DOCUMENT_TOKEN_TO_BE_REPLACED

END_OF_DOCUMENT_TOKEN_TO_BE_REPLACED 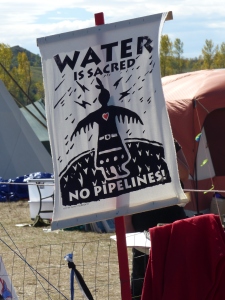 A series of local events and fundraisers are planned Saturday, Nov. 12, noon – 5 p.m. along the American Indian Cultural Corridor as part of a National Day of Action in support of the Standing Rock Sioux Nation and opposing the Dakota Access Pipeline (DAPL). The event is called “The Ave Stands with Standing Rock.” All proceeds are going to the Water Protectors.

The Presiding Bishop for the United Methodist Church in Minnesota and the Dakotas has issued a moving statement in support of the protesters attempting to stop the Dakota Access Pipeline and the threat the pipeline poses to the Standing Rock Sioux Nation which spans the North Dakota/South Dakota border.

Support for the protest is growing. There are a number of ways that you can support the protest, too, both financially and by using your voice.

But before getting to the details of how to help, consider the power of a personal story exemplified by the moving statement by Bishop Bruce R. Ough of the Dakotas-Minnesota Episcopal Area of the United Methodist Church. His statement is titled: “Mni Wiconi (Lakota for ‘Water is Life’)” He writes:

This is a very difficult and complex issue for our country, and for me personally. I grew up in the oil fields of northwest North Dakota. My father earned his living and supported our family working for an oil exploration company. My grandparents homesteaded on land less than 20 miles west of Watford City, the epicenter of the Bakken oil fields. I have farmed and cared for that land and its precious water resources. I attended a Bureau of Indian Affairs school during my junior high years. After college, I spent two years living and working on the Standing Rock Reservation. I was living there during the American Indian Movement’s protest at Wounded Knee. I grew to love the Lakota and Dakota people, their spirituality, and their deep respect for God’s creation and creatures. I have a unique history and perspective on the current conflict. …

He ends his statement with the following: END_OF_DOCUMENT_TOKEN_TO_BE_REPLACED

The United Methodist Church (UMC) has been working for two decades to come to terms with a horrific chapter in its history: Its connection to the 1864 Sand Creek Massacre, led by Methodist Pastor and military leader John Chivington.

The Sand Creek Massacre is but one of many atrocities committed against Native American people by the U.S. government and settlers; Minnesota has its own history of atrocities. The UMC is trying to chart a path of repentance and healing, one that other religious communities could learn from and apply to their own communities.

It is a path that includes not just apologies, but concrete acts of repentance. END_OF_DOCUMENT_TOKEN_TO_BE_REPLACED