The environmental movement has been evolving for a century; in its latest advancement, some environmental groups are taking on racial justice as essential to their mission.

The environmental movement encompasses a broad sweep of organizations and strategies, but even a mainstream group such as the Sierra Club is centering racial justice. A recent article by Hop Hopkins, the Sierra Club’s national director of strategic partnership, put it this way:

I really believe in my heart of hearts—after a lifetime of thinking and talking about these issues—that we will never survive the climate crisis without ending white supremacy.

The Environmental Justice (EJ) movement was founded by — and continues to be led by — Black, Indigenous, and communities of color and low-income communities.  These are the frontline communities that are the first to experience environmental harm and the last to get environmental benefits, according to the Center for Earth, Energy and Democracy.

In order to reverse the long history of government and industry decision making that has led to environmental racism and inequality, EJ communities must be placed at the center of our environmental agenda.”

Some mainstream environmental groups are working to follow this lead. This isn’t to say that they’re “woke,” just moving in a good direction.

Racial justice is integral to climate justice. 5,712 cases of missing & murdered indigenous women, girls, and relatives were reported in 2016. According to Native Women’s Wilderness, indigenous women are murdered at 10 times the rate of other ethnicities. This is the third leading cause of death for indigenous women, according to the Centers for Disease Control. MN350’s MMIR campaign was established to end this violence. 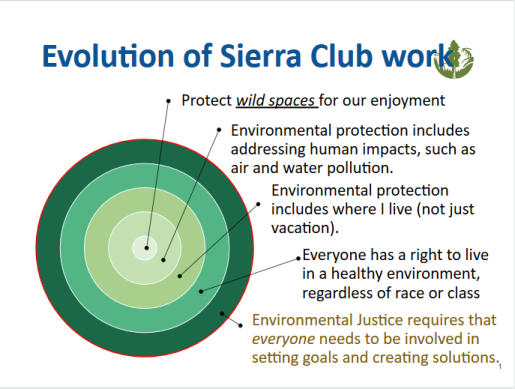 In its infancy, the environmental movement simply focused on preserving wild and natural spaces. It went on to tackle such issues as industrial air and water pollution. It expanded yet again by understanding that environmental protection is about where people live, not just about vacation spots.

The latest — and overdue — growth rings acknowledge that Black, Indigenous and people of color are disproportionately harmed by environmental pollution, and their voices and ideas are critical to finding solutions.

Environmental Justice means that mainstream (mostly white) environmental groups don’t presume to have all the answers. For example, they listen to and learn from community leaders such as Roxanne O’Brien, who lives in North Minneapolis and worked tirelessly to shut down the Northern Metal Recycling plant because its air pollution disproportionately harmed nearby families of color.

It means that large environmental groups working to stop the Enbridge Line 3 tar sands pipeline need to work with Native nations and  Indigenous-led organizations who face the greatest threats to the water, climate and treaty rights. Indigenous Nations and organizations have provided critical leadership opposing Line 3, as well as collaborating with environmental groups on everything from hosting events to filing lawsuits.

It’s old news that the nonprofit world is fragmented among thousands of organizations with their own agendas. Such a fragmented system can make big changes difficult. To the extent various organizations and movements find common ground — such as the profound connections between racial justice and environmental protection — we can have a stronger voice and push bigger changes.

One small change in predominantly white, mainstream organizations is an increasing willingness to use direct terms such as “white supremacy” and “systemic racism.” As the national Sierra Club wrote in a recent email:

We must reckon with how white supremacy — both past and present — has shaped our institutions and do the critical anti-racism work necessary to repair the harm done. The environmental movement does not exist in a vacuum, and it is our responsibility to use our power to help abolish systemic racism, which is destroying lives, communities, and the planet.

This is an important frame to advance larger social changes. White supremacy and the extractive economy its developed depend on disposable people and disposable places. This mindset supports both systemic racism and environmental damage.

In closing, a reflection by Eric Holthaus in his blog The Correspondent:

… climate action can’t just be aimed at reducing emissions. It must focus on reorganising society to bring about a world that’s grounded in justice and equity. If that happens, the climate emergency will be well on its way to ending.

A key part of reimagining the climate narrative will be active anti-racism: making the choice to listen to voices which are different from those who have dominated decision-making for the past 500 years.