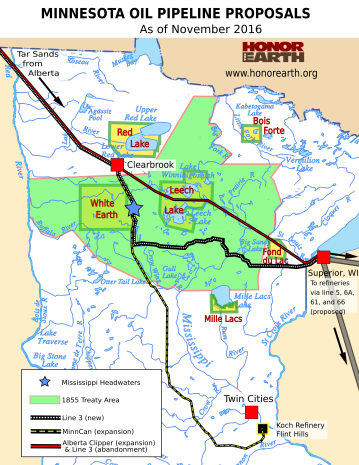 The Minnesota Department of Commerce just released a draft Environmental Impact Statement (EIS) on a proposed crude oil pipeline through northern Minnesota. The project, Enbridge Line 3, would run 337 miles from the North Dakota border to Duluth/Superior, including stretches through the Mississippi headwaters region and prime wild rice waters.

The 1894-page document includes a short section on Environmental Justice. To its credit, it acknowledges the pipeline would infringe on Anishiaabe (Ojibwe) treaty rights and exacerbate historical trauma. But it lacks Native voices and is silent on some important questions.

Disproportionate and adverse impacts would occur to American Indian populations in the vicinity of the proposed [Line 3] Project.

Then a few lines later:

A finding of “disproportionate and adverse impacts” does not preclude selection of any given alternative. This finding does, however, require detailed efforts to avoid, mitigate, minimize, rectify, reduce, or eliminate the impact associated with the construction of the Project or any alternatives.

That’s an indirect way of saying Anishinaabe voices and treaty right don’t really matter — the project can proceed based on what non-Native people consider to be fair mitigation.

Let’s take a hard look at the Environmental Justice chapter in the EIS.

According to the report:

American Indian communities and individuals have unique health issues associated with historical trauma and structural racism. Data from the Minnesota [Department of Health] indicate that American Indians in Minnesota have greater health disparities and poorer health outcomes compared to other racial and ethnic groups in Minnesota. …

The impacts associated with the proposed Project [Line 3] and its alternatives would be an additional health stressor on tribal communities that already face overwhelming health disparities and inequities. (Page 11)

Comment: Glad they included this in the report, but it doesn’t go into any depth about what “historical trauma” really means: broken treaties, boarding schools, cultural assimilation and genocide. The question is: Will decisionmakers understand what historical trauma is, and give this issue the weight it deserves?

While the EIS acknowledges that pipeline construction could increase the sexual exploitation of Native women, the solution is woefully inadequate and voices of Native women are missing. According to the EIS:

Other concerns during [Line 3] construction are the influx of temporary workers and associated impacts, such as sex trafficking and sexual abuse in local communities. Increases in sex trafficking, particularly among Native populations, are well documented. … American Indian and minority populations are often at higher risk if they are low-income, homeless, have a lack of resources, addiction, and other factors often found in tribal communities. … The addition of a temporary, cash-rich workforce increases the likelihood that sex trafficking or sexual abuse will occur. Additionally, rural areas often do not have the resources necessary to detect and prevent these activities. (Page 10)

However, Enbridge can prepare and implement an education plan or awareness campaign around this issue with the companies and subcontractors that construct, restore, and operate the pipeline, as well as by working with local communities and tribal communities to raise awareness and provide resources to address the issue. (Page 10)

Enbridge calls its proposal the Line 3 Replacement Project, but that’s a misnomer. The current Line 3 is 50 years old and falling apart. Enbridge wants to abandon it in the ground and install a new and larger pipeline along a new route.

All routes, including the Applicant’s preferred route, would cross treaty lands that are off-reservation; these lands may be used for traditional tribal uses such as fishing, hunting and trapping, and/or agricultural activities. … Reserved treaty rights include access to traditional  fishing areas. Tribal resources include walleye and trout fisheries, which are predominately used for subsistence. Traditional terrestrial game and waterfowl hunting grounds are habitat for a variety of subsistence resources, including deer, elk, ducks, geese, and turkey. Several federal treaties have reserved wild rice lakes for use by Indian tribes, some of which are also considered Traditional Cultural Properties …. Wild rice is both a source of income and subsistence for the tribes in the area. These treaty rights and tribal resources are important to the Indian tribes as both natural and cultural resources and reinforce their cultural identity. Additionally, the mental well-being of Indian tribal members is linked to their tribal resources and access to their treaty rights. (Page 7)

Comment: Saying that treaty rights ” are important to the Indian tribes” is an odd turn of phrase. They are not just “important,” they are the law. Neither the state of Minnesota nor Enbridge should be able to unilaterally break treaty rights simply by offering some form of mitigation they deem appropriate. We will address this issue in greater depth in another post.

Potential pipeline spills and ruptures and clean-up plans are discussed in other parts of the report. In the Environment Justice section, it says:

From an Ojibwe perspective, waterbodies at risk from the proposed pipeline include any water directly downstream from a pipeline crossing. Pollution of these waters from a petroleum spill would create a significant hardship to traditional lifeways and spiritual and religious needs of the people. The risk of harm to the people who depend on these waters for sustenance of physical and spiritual needs is greatly magnified by the presence of traditional food sources such as wild rice (Manoomin) and walleyed pike (ogaa). (Page 11)

Comment: The draft EIS acknowledges this risk of “significant hardship.” The section has additional information on “spill prevention” and “Cleanup, Recovery, and Restoration” but lacks Native voices on what, if anything, could be done to mitigate the impacts of a major spill to the “traditional lifeways and spiritual and religious needs of the people.” The report talks about recovering costs from industry if there is a spill. But that doesn’t necessarily fix things when you are talking about a people’s spiritual connection to the land. That voice is missing. Personal stories are powerful. Yes, they can be anecdotal, but what “significant hardship” means is not conveyed well in this analytical form.

Line 3 Would Introduction of Invasive Species

According to the report:

[T]he introduction of invasive species following [pipeline] construction alters plant composition within the construction and operation area and often extends well beyond. Invasive plants diminish the overall health and well-being of the land and the enjoyment of the land by tribal members.  (Page 9)

Wild parsnip (Pastinaca sativa) recognized by the Minnesota Department of Natural Resources to be an invasive noxious weed has been introduced to the Fond du Lac Reservation along existing pipeline rights-of-way. Contact with this plant can lead to extremely painful rashes over the skin. This is particularly important in the context of a pipeline within reservation lands and ceded territories that are used by local indigenous groups for food gathering. The Applicant’s preferred route risks introducing wild parsnip into a new area because introduction is particularly susceptible in disturbed areas. Further introduction of invasive plants such as wild parsnip in the ceded territories of northern Minnesota and Wisconsin poses a clear danger to the safe exercise of Ojibwe treaty rights. (Page 11)

Why Did this Report Come from the Department of Commerce, Anyway?

Comment: If you use a “commerce” lens, you are more likely to favor commerce over other priorities. This structure seems to make natural resources and pollution considerations take a back seat to commerce.