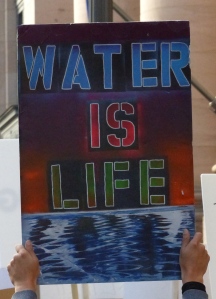 The Standing Rock Nation will challenge the Dakota Access Pipeline (DAPL) in court  based in part on its federal water rights, according to Chairman David Archambault II. Archambault made his comments in an interview with MSNBC, posted online by Indian Country Today.

Archambault cited the “Winters Doctrine” as one reason that DAPL should be denied. According to a summary of the Winters Doctrine by the Congressional Resource Services:

Although the federal government has authority to regulate water, it typically defers to the states to allocate water resources within the state. The federal government maintains certain federal water rights, though, which exist separate from state law. In particular, federal reserved water rights often arise in questions of water allocation related to federal lands, including Indian reservations. Indian reserved water rights were first recognized by the U.S. Supreme Court in Winters v. United States in 1908. Under the Winters doctrine, when Congress reserves land (i.e., for an Indian reservation), Congress also reserves water sufficient to fulfill the purpose of the reservation.

Archambault also contends that President Trump has a conflict of interest in his efforts to expedite DAPL approvals through executive memorandum. Trump received a $100,000 contribution from an executive of Energy Transfer Partners, the company building the pipeline, he said. Trump also has invested in Phillips 66, which will refine the oil.

“He is going to benefit,” Archambault said. “… The president didn’t even reach out to hear our side or try to understand our concerns.”

Andrew Jackson, Despised by Many Native Peoples, Gets Place of Honor in Oval Office

Trump’s rise has often been compared to the populist election of Jackson, including by some of the new president’s own team.

But Jackson also was known as “Indian killer.” In 2012, Indian Country Today published a piece headlined: Indian-Killer Andrew Jackson Deserves Top Spot on List of Worst U.S. Presidents. According to the story:

His first effort at Indian fighting was waging a war against the Creeks. President Jefferson had appointed him to appropriate Creek and Cherokee lands. In his brutal military campaigns against Indians, Andrew Jackson recommended that troops systematically kill Indian women and children after massacres in order to complete the extermination.

Trump is either unaware or indifferent to the message he is sending to Indian Country by prominently displaying Jackson’s portrait. The same could be said to the message he sent last year to the African American community after the U.S. Treasury Department announced that anti-slavery advocate Harriet Tubman would replace Andrew Jackson on the front of the $20 bill. (Jackson will get moved to the back; the changes won’t happen until 2020.)

At the time of the announcement, CNN reported that then-presidential candidate Donald Trump called the $20 bill redesign “pure political correctness,” suggesting instead that Tubman go on the $2 bill, “which is no longer printed.”