Skip to content
HomeVigil for Injured Water Protector; Where to Call; and Critiquing Media Coverage

More than 100 people braved a cold evening to hold a vigil Tuesday night for a young water protector who sustained a serious arm injury, the result of ongoing excessive force used against those opposing the Dakota Access Pipeline. Sophia Wilansky, 21 of New York, was carrying water to unarmed people on the front lines when she was struck by a concussion grenade, according to a report in Indian Country Today. She had to be airlifted to Hennepin County Medical Center where she underwent a lengthy operation to save her badly damaged arm.

Both her radial and ulnar artery were completely destroyed. Her radius was shattered and a large piece of it is missing. Her medial nerve is missing a large section as well. All of the muscle and soft tissue between her elbow and wrist were blown away. The police did not do this by accident—it was an intentional act of throwing it directly at her.  …

I died a thousand deaths today and will continue to do so for quite some time. I am left without the right words to describe the anguish of watching her look at her now alien arm and hand.” 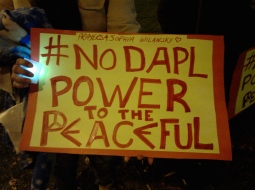 Click here for the fund set up by friends to help with Sophia’s recovery.

The Morton County Sheriff’s Department blamed the water protectors for Sophia’s  injury, saying it resulted from a propane explosion created by the Water Protectors, according to the Indian Country Today story. That statement is refuted by Sophia, eyewitnesses, and evidence in the wound.

The Tuesday night vigil included Native drumming and singing and gave people an open microphone to talk about their experiences and thoughts about Standing Rock. The event was held under a hospital overhang to shelter participants from the cold rain, sleet, and snow.

Emilie Bouvier, Congregational Organizer for Environmental Justice for the
Minneapolis Area Synod, ELCA sent out a release with suggested places to call. Here is an edited version:

Speak from your heart, but here are some talking points.

Energy Transfer Partners is not respecting the request by key federal agencies to halt construction within 20 miles of the river. There are concerns that the company already has begun to drill under the river without the needed easement from the Army Corps of Engineers. (We have not been able to confirm.)

Pressure also is being placed on institutions financing the pipeline. (An earlier blog has more details.) Please call if you have an account with any of these banks:

Note to Costco customers: Costco uses the the Citi Visa card exclusively. Here is one on-line petition aimed at Costco.

This piece from the Huffington Post gives examples: Injustice At Standing Rock: The mainstream media is missing quite a remarkable story:

Morton County Sheriff spokesman Rob Keller told NBC that no water cannons were used and water was only deployed to put out fires set by water protectors. At the same time, I was watching it happen live. Where’s the responsible reporting?

Thanks again to Emilie Bouvier and the Minneapolis ELCA Synod for its research.

2 thoughts on “Vigil for Injured Water Protector; Where to Call; and Critiquing Media Coverage”