Hennepin County Board Chair Jan Callison supports Sheriff Richard Stanek’s decision to send deputies to North Dakota, according to an email she is sending out in response to constituent opposition to the move.

Hennepin, Anoka, and Ramsey counties all have sent deputies and equipment as part of a militarized response to the Water Protectors trying to stop the Dakota Access Pipeline. The Morton County (ND) Sheriff’s Department sought the help through a mutual aid agreement. Stanek’s decision to send deputies has sparked protests. Many Hennepin County residents oppose using local resources to intimidate and arrest the Water Protectors. (Here is an earlier blog.)

Callison said ultimately this was Stanek’s decision, but she supports it based on what she framed as safety concerns. Her email said: “the presence of professional, highly trained law enforcement officers can contribute to a peaceful resolution of highly inflamed situations such as this, a resolution where the rights of all are respected. I think the right answer is to have the right people present who will contribute positively to a fair resolution. And I believe that Sheriff Stanek understands this responsibility.”

That is to say, unlike private security guards, the Hennepin County Sheriffs deputies won’t use mace and attack dogs. However, it still means that our local resources are being used as a part of a disproportionate, highly militarized, and provocative response to silence the Water Protectors. With the current tremendous power imbalance, it is reasonable to ask whether this truly is “a resolution where the rights of all are respected”  or in any way fair. To me, the answer is no.

Here is Callison’s full email, provided by her office.

Many groups have organized against this decision. For example, the Sierra Club North Star Chapter has a letter urging Hennepin County to withdraw its resources. Click to sign. 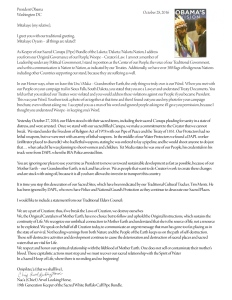 to President Obama, telling him to keep his word and stop the desecration of sacred lands.

Click on the letter at left for the full text. It reads in part:

“When you met with Our People on your campaign trail in Sioux Falls, South Dakota, you stated that you are a Lawyer and understand Treaty Documents. You told us that you realized our Treaties were violated and you would address these violations against our People if you became President. This was your word. …

Looking Horse’s letter also includes a statement of how a pipeline backer was trying to infiltrate and undermine a recent action by the water protectors.

Yesterday, October 27, 2016, our Elders stood with their sacred items … pleading for sanity in a state of distress, and were arrested. … We stand under the Freedom of Religion Act of 1978 with our Pipe of Peace and the Treaty of 1851. Our Protectors had no lethal weapons, but we were met with an army of lethal weapons. In the middle of our Water Protectors we found a DAPL worker (infiltrator placed to discredit) who had lethal weapons, stating he was ordered to lay a pipeline, and he would shoot anyone to do just that … when asked if he was planning to shoot women and children. Yet Media states he was one of our People, his credentials in his truck were from DAPL, when the BIA Police arrested him.

Standing Rock Sioux Chairman David Archambault II is asking for people’s support of a petition asking President Obama to “reject the Dakota Access Pipeline and declare this land a cultural district, eligible for listing on the National Register of Historic Places, to ensure its protection.”

Last month, Dakota Access bulldozed two miles of burial grounds. Their private security sicced dogs on and pepper-sprayed those who tried to protect the site. This company cannot be trusted. Urgent action is needed to prevent Dakota Access from continuing to violate federal laws.

We demand to be heard, and we will continue to stand together for our nation, and for all who live with and by the Missouri River, until justice is done.

MSNBC reported Oct. 26 that it has requested statements from both Clinton and Trump as to whether they support pipeline construction, but had received no answers. Trump’s campaign has received a $100,000 donation from the CEO of the pipeline company, MSNBC said. Trump also has an investment in the pipeline company of between $500,000 and $1 million.

Democracy Now! reports on indigenous youth who occupied Hilary Clinton’s campaign headquarters to demand that she take a stand on the pipeline. Now is the time to put pressure on both candidates.

We already have reported on the numerous statements coming from religious denominations in support of the Water Protectors at Standing Rock. Church leaders also are visiting in person, a sign of the importance spiritual leaders are placing on this work. Here are two examples.

Episcopal Church Presiding Bishop and Primate Michael Curry visited the Water Protectors in North Dakota on Sept. 24. According to the Episcopal News Service, he said:

I want to now suggest that Standing Rock may be the new Selma. This may well be the moment when nations come together, when peoples of goodwill come together to transform this world from the nightmare that it often is into the dream that God intends so that clean water is available to everybody, so that every man, woman and child knows the peace and the goodness that God intends for us all.

My heart breaks to see the pictures of armed police in riot gear dispersing the peaceful protesters who positioned themselves on the land that separates the Missouri River from the Dakota Pipeline. …

I can assure you that even if the pipeline goes through, this story is not finished. I see this as a kairos moment in which to open a wider conversation of how we treat our indigenous brothers and sisters and how we care for our sacred earth and waters.

We are sure there are other examples of religious leaders visiting the camp. Please send them our way, with statements.

This Day in History: Archaeological Resources Protection Act of 1979

On this day, Oct. 31 1979, the Archaeological Resources Protection Act of 1979 went into effect. According to a summary:

[It was] enacted for “the protection of archaeological resources and sites which are on public lands and Indian lands, and to foster increased cooperation and exchange of information between governmental authorities, the professional archaeological community, and private individuals.

Recall what happened when the Standing Rock Sioux community identified sacred sites on private land along the planned route of the Dakota Access Pipeline? Pipeline owners Energy Transfer Partners went to the site right away and started digging. Yes, it was on private land, but so much for fostering “cooperation” and “exchange of information.”